First time poll categorizes straight respondents; analyzes their knowledge, awareness of LGBTQ+ matters
--Most "knowledgeable but unconcerned"; do not think LGBTQ+ issues relate to them--

Dentsu Inc. (Headquarters: Minato-ku, Tokyo; President & CEO: Hiroshi Igarashi; hereinafter, "Dentsu" or the "Company") announced today that the Dentsu Diversity Lab, its organization specializing in diversity- and inclusion-related survey analysis and solutions development, together with the Company's PR Solution Design Division have conducted an online survey of sexual minorities, including members of the lesbian, gay, bisexual, and trans-gender (LGBT) community. Dubbed the LGBTQ+ Survey,* the December 2020 study analyzes responses to a nationwide survey of 60,000 people between the ages of 20 and 59.

Prior to this survey, Dentsu had carried out LGBT surveys in 2012, 2015, and 2018. This fourth survey was named the LGBTQ+ Survey to reflect the more detailed analysis of groupings besides the lesbian, gay, bisexual, and trans-gender minority categories.

In the latest survey, the percentage of respondents who identified themselves as being in a sexual minority is 8.9%, the same findings as the 2018 LGBT Survey. The 2020 survey reveals sexual minorities besides the lesbian, gay, bisexual, and trans-gender, categories. These include people who are questioning (not sure or undecided about their sexual identity and orientation), asexual and aromantic (do not feel a sexual or romantic attraction to others), and who describe themselves as being of a non-binary gender (identify themselves as being neither male or female).

In addition, 80.1% of respondents indicate they are familiar with the term LGBT. This is an 11.6 percentage point increase over the 68.5% of the 2018 survey, indicating that the concept is now commonly understood in Japan. Meanwhile, familiarity with terms for sexual minorities besides lesbians, gays, bisexuals, and trans-gender people still appears to be comparatively low. This suggests a need to promote further public awareness of sexual diversity.

The 2020 survey also measures knowledge and awareness of matters related to LGBTQ+ issues among respondents who identify themselves as being straight. This aspect, too, had not been covered in Dentsu's previous three surveys. These respondents were categorized into six clusters (see Chart 1). Most of the respondents (34.1%) fall into the Knowledgeable but Unconcerned cluster, which represents those who have some knowledge of LGBTQ+-matters but who do not pay particularly attention to related issues. Their responses indicate that they were little concerned about the topic of LGBTQ+, perhaps because their personal involvement was limited, due to an absence of sexual minorities in their lives. In light of this result, promoting more public education about issues facing sexual minorities could contribute to realizing greater equality in Japanese society.

* In the survey, sexuality was broken down into three categories, namely, biological sex (one's sex assigned at birth), gender identity (personal concept of one's gender ), and sexual orientation (the gender to which one is attracted). Respondents who identified themselves as not being straight (i.e., not being heterosexual and identifying with their sex assigned at birth) are defined as members of the LGBTQ+ community.

The poll's key findings
1. Most straight respondents are categorized as Knowledgeable but Unconcerned, since they indicated having knowledge about matters relating to the LGBTQ+ community, although they did not regard such matters as relevant to their lives.
2. Various sexual minorities besides LGBT individuals account for almost half of the 8.9% of respondents who identify themselves as being LGBTQ+.
3. Some 80% of respondents are familiar with the term LGBT, but were not aware of other sexual minorities.
4. Almost 90% of respondents answer that sexual diversity should be taught in schools.
5. Municipal support for same-sex couples contributes to protecting the rights of sexual minorities and raising local awareness.
6. The buying power of the LGBTQ+ market is estimated to be worth ￥5,416 billion across 22 categories of goods and services.

1. Most straight respondents are categorized as Knowledgeable but Unconcerned, since they indicated having knowledge about matters relating to the LGBTQ+ community, although they did not regard such matters as relevant to their lives.

The survey asked 5,685 respondents who identified themselves as being straight about their thoughts on the LGBTQ+ community. Their responses were analyzed according to five factors concerning sexual minorities: awareness of issues, acceptance, feelings of repulsion, worry over social impact, and related knowledge.


2. Various sexual minorities besides LGBT individuals account for almost half of the 8.9% of respondents who identify themselves as being LGBTQ+.

The 2020 survey shows that 8.9% of the respondents identified as being LGBTQ+, unchanged from the result of the 2018 survey. Respondents are defined as LGBTQ+ if they identified themselves as not being straight (heterosexual people who identify with their sex assigned at birth). 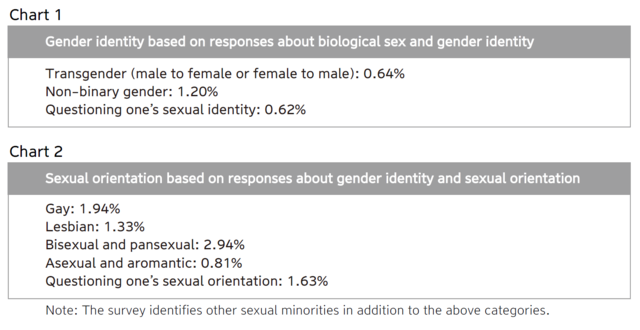 3.Some 80% of respondents are familiar with the term LGBT, but were not aware of other sexual minorities.

In the 2020 survey, 80.1% of respondents said they are familiar with the term LGBT, up 11.6 percentage points from the 2018 survey result of 68.5%, and far above the 2015 survey result of 37.6% (see Graph 1). Besides the words lesbian, gay, bisexual, and transgender/transexual, however, around 80% of respondents had never heard the words for various other sexual minorities (see Graph 2). This indicates that general awareness of gender and sexual diversity has not been growing in Japan. 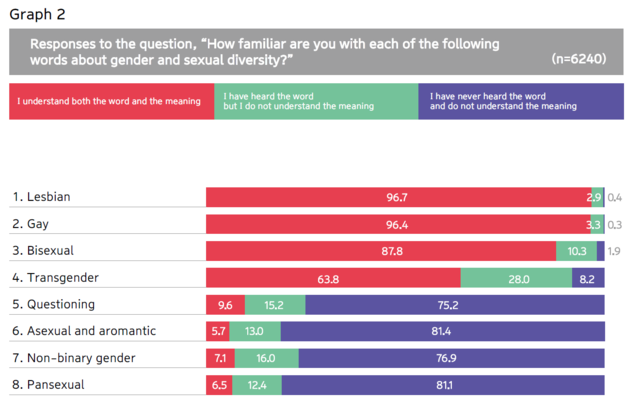 4.Almost 90% of respondents answer that sexual diversity should be taught in schools.

In response to a question about whether human rights are being protected throughout society, 73.4% of straight respondents answered either "Yes" or "To some extent," compared with the much lower result of 54.8% for LGBTQ+ respondents.

Nevertheless, the result was 59.8% among LGBTQ+ respondents who live in municipalities that have adopted a system for formally certifying same-sex couples and providing them with some limited benefits. These systems, which have been established in 100 municipalities across Japan (as of April 1, 2021), are believed to contribute to protecting human rights and raising local awareness of issues facing sexual minorities. This is also reflected in the survey results.

Based on average scores of five questions about awareness of LGBTQ+ issues, awareness was highest in Okinawa, Kyoto and Yamagata Prefectures, in descending order. Numerous municipalities in Okinawa and Kyoto are implementing certification systems for same-sex couples, and the prefectural government of Okinawa has also made an official declaration on the importance of sexual diversity.

6.The buying power of the LGBTQ+ market is estimated to be worth ￥5,416 billion across 22 categories of goods and services.

The survey team estimates the buying power of Japan's LGBTQ+ community to be ￥5,416 billion (around $50 billion) by analyzing their consumption patterns in comparison with the general population across 22 categories of goods and services, based on government data.** These categories of goods and services were selected because they account for substantial amounts of household spending, or because product choices can easily change depending on consumer preferences.

The 2020 total is below the ￥5,937 billion amount estimated in Dentsu's 2015 survey. However, that reflects a decline in both Japan's population and its overall household spending due to the COVID-19 pandemic. Given the circumstances, spending on education and certification-related activities as well as books, magazines, and newspapers has been increasing. Compared with straight respondents, the survey found that LGBTQ+ respondents spend significantly more money per person on medical and insurance outlays (including for medical examinations, OTC drugs, nursing care), as well as on health foods and supplements.

** Data drawn from Japan's Statistics Bureau family expenditure surveys in 2020 were used to calculate the estimate. 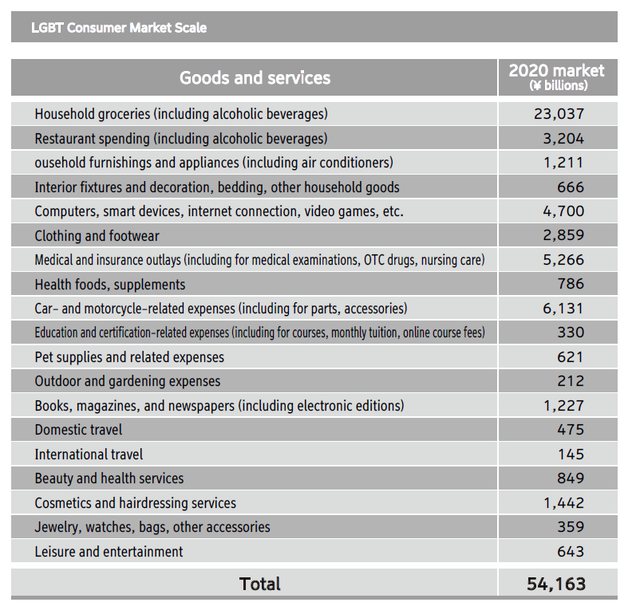 Survey method
The 5,685 respondents who identified themselves as being straight were asked about their thoughts on the LGBTQ+ community, and their responses were analyzed according to five factors concerning sexual minorities: awareness of issues, acceptance, feelings of repulsion, worry over social impact, and related knowledge.

・Percentage and characteristics of each cluster
Active Supporters: 29.4%
These people are highly aware of LGBT-related issues and actively support the movement. Many learned about the issues through members of sexual minorities in their lives or information from outside Japan.

Positive and Friendly: 9.2%
These people had comparatively low scores for indicators of knowledge about LGBT-related matters, but comparatively high scores for acceptance and awareness of issues, indicating their open-mindedness to sexual minorities.

Knowledgeable but Unconcerned: 34.1%
These people have knowledge of LGBT-related matters but few opportunities to engage with the issues, due to an absence of sexual minorities in their lives. They tend to accept the status quo.

Misinformed: 16.2%
While supportive of human rights, these people are critical of the LGBT community due to numerous misconceptions about it, such as the idea that sexual minorities are a major cause of Japan's declining birthrate.

Polite Avoiders: 5.4%
These people do not actively criticize the LGBT community, but they avoid and do not accept its members. While knowledgeable to some extent, they do not recognize the seriousness of issues faced by sexual minorities.

Judgmental, Opposed: 5.7%
These people are repulsed by sexual minorities and deeply worried about their impact on society. They also have little interest in other issues confronting society, such as racial discrimination and environmental problems. 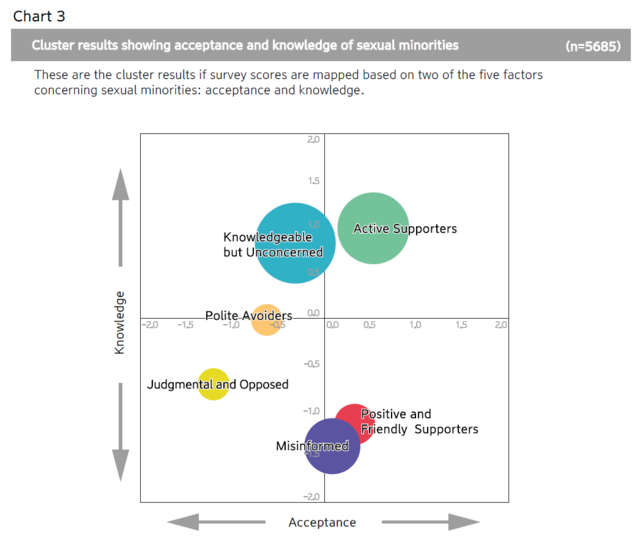 ・Characteristics of clusters
Among respondents in both the Active Supporters and the Positive and Friendly clusters, women account for almost 70%, and the percentage of young people is comparatively high. In contrast, men account for over 80% of respondents in the Judgmental and Opposed cluster, with the percentage of people in their 50s being comparatively high. 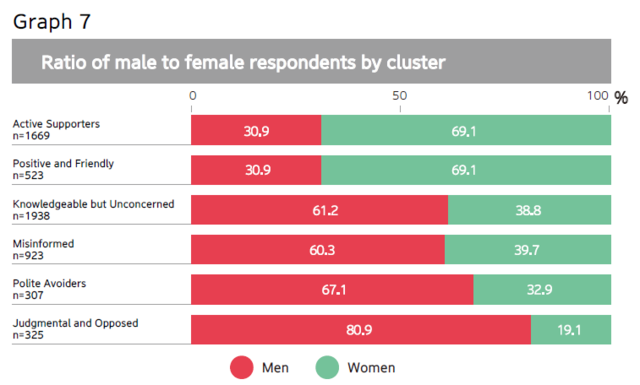 ・Knowledgeable and Unconcerned Cluster
Among the characteristics of this cluster, many respondents claim to "have no particular opinion" about people in the LGBTQ+ community, despite indicating concern about related issues. They also tend to not have a high awareness of those issues. Respondents in this cluster have a comparatively low percentage of friends and family members who are members of sexual minorities (only the Judgmental and Opposed cluster was lower), suggesting that they had fewer opportunities to directly engage with such issues.

Note: The survey sample was weighted with the country's population composition with respect to prefectures, gender, and age groups (20-39 and 40-59) to calculate the proportion of people in Japan who identify as LGBTQ+.
#####