In 2021, total advertising expenditures in Japan increased 10.4% year on year to 6,799.8 billion yen. This increase was supported by the solid growth of Internet advertising expenditures amid efforts to promote a digital transformation of Japanese society, as well as the weakening impact in the second half of the year of the COVID-19 pandemic, which has continued since 2020.

Overview of Japanese Advertising Expenditures during 2021
◆In 2021, total advertising expenditures amounted to 6,799.8 billion yen (up 10.4%). As in 2020, expenditures were significantly impacted by the COVID-19 pandemic in the first half of 2021, during which the Japanese government responded to the spread of infections by declaring a state of emergency and implementing quasi-emergency measures. In the second half, business and consumer sentiment improved amid progress in the COVID-19 situation. Against that backdrop, Television advertising expenses recovered and Internet advertising expenses increased at an accelerated pace, driving up growth in advertising expenses overall. The recovery in demand for advertising was also given a boost by the 2020 Tokyo Olympic and Paralympic Games. From October, results in many advertising media clearly improved as limits on attendance at concerts, sporting events, theme parks, and so on, were gradually eased, and the economy and flows of people began returning to normal. Meanwhile, the number of hybrid events combining live and online activities steadily increased, and live events started to be held as measures were put in place to prevent the spread of COVID-19 infections. Among such events, the holding of large-scale sporting events, in particular, provided grounds for optimism.

◆Internet advertising expenditures increased 21.4% year on year to 2,705.2 billion yen, maintaining the high rate of growth recorded since Dentsu began estimating results in 1996 for these expenditures. For the first time, Internet advertising expenditures exceeded Traditional Media expenditures, which amounted to 2,453.8 billion yen (up 8.9%). The market grew thanks to substantially higher demand for video advertising, particularly on video-streaming services, along with the greater use of digital promotions. Meanwhile, in response to growing calls from the public to provide a balanced amount of information about COVID-19 and related matters to a wider audience, the Internet as well as other types of media have been steadily deployed for this purpose during the pandemic.

◆Expenditures for Digital Advertising Carried by Traditional Media Companies surpassed the 100 billion yen mark for the first time, after having posted double-digit growth for three consecutive years since 2018, the first year for which Dentsu estimated expenditures in this category. These expenditures are for advertising through Internet media services, mainly provided by newspaper, magazine, radio, and television companies. These companies have been leveraging their editorial and production expertise to offer rich content and expand various services, including video and audio streaming, as well as online events.

For reference, please refer to the TABLE 2.

The full text of 2021 Advertising Expenditures in Japan is currently being compiled and will be available on Dentsu's website at the end of April 2022. For reference, please see the tables on the following pages. 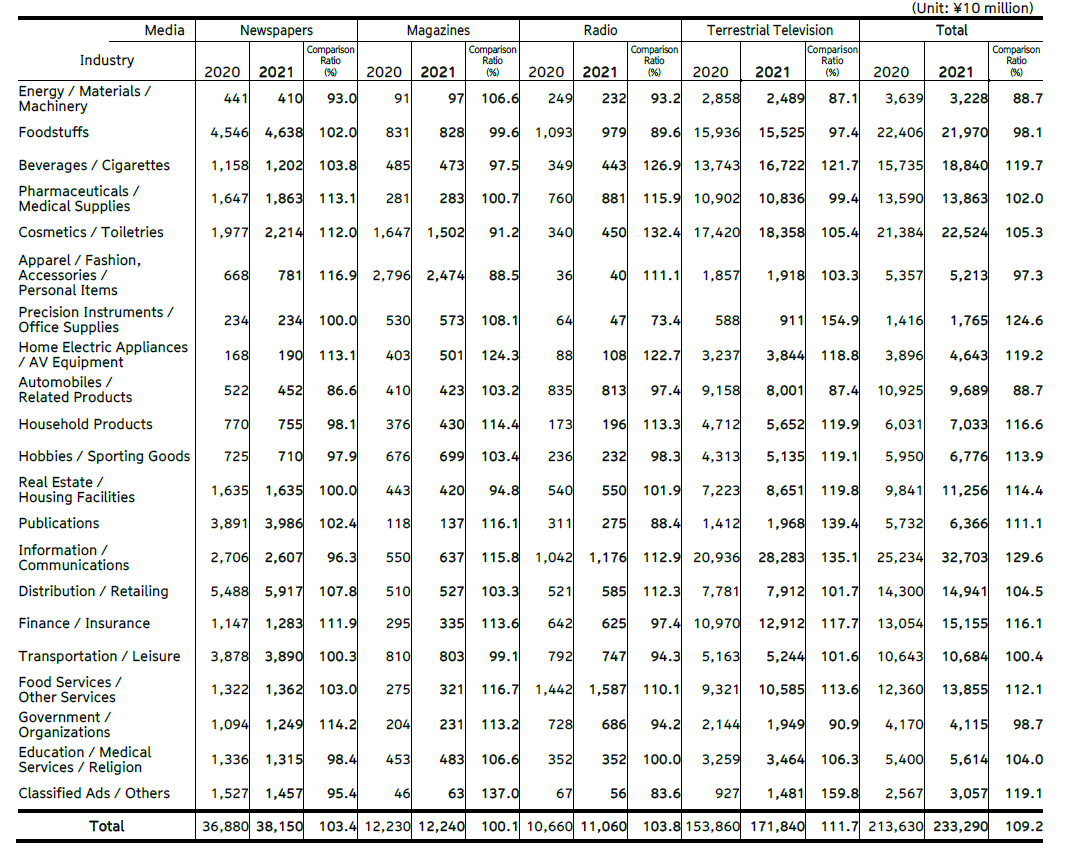 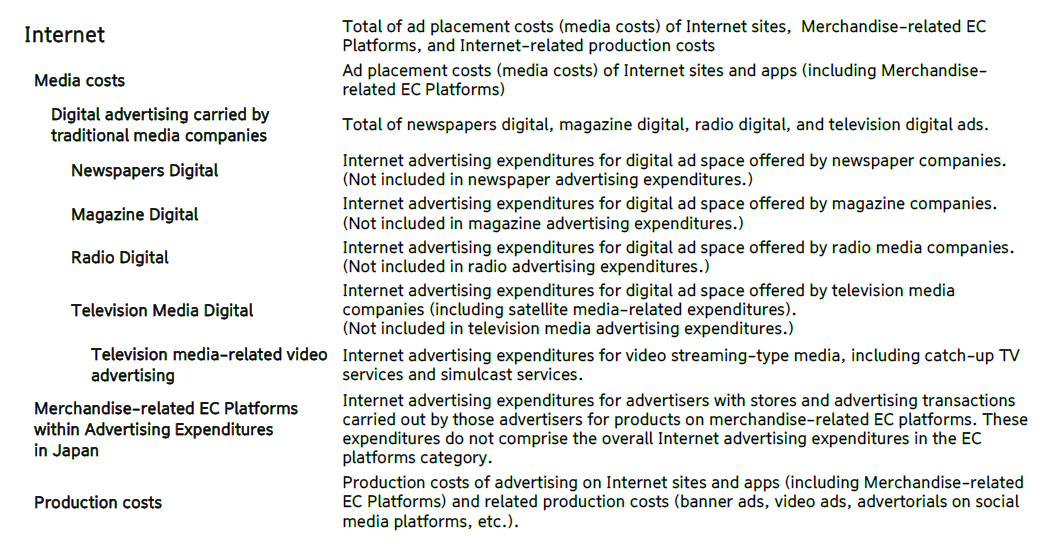