The hint to ‘collective impact’ that lead to a sustainable business: Sustainable d Actions No.5How a ‘circular economy’ would change consumption and society

The webinar introduced some collective impact cases jointly conducted by local governments and various firms from the private sector to help achieve a circular economy. This is the Part 1 of a three-part report summarizing the webinar content, featuring five leaders from firms that are helping to develop a circular economy. The five speakers took part in the Day 2 keynote session, discussing the theme, “A Circular Economy Will Change Japan!”

The program kicked off with an introduction to case studies of the progressive activities carried out by Kao, Euglena, and Nakadai to develop a circular economy.

Kao Corporation attracted huge interest for the unusual collaboration with rival company Lion Corporation to promote the recycling of refillable plastic containers for products they manufacture, such as detergents. Kao started a demonstration experiment in 2020 at Ito Yokado shopping center in Sumida Ward, Tokyo, by placing a recycling box for used refillable plastic containers that would be collected for recycling. In eight months since the project started, Kao collected 5,200 containers, twice the amount they planned for, which would be recycled or used to make recycled blocks. Their goal is to increase the involvement of local communities and children in developing a society that recycles waste to usable resources.

Euglena Company, Ltd., is a bio-venture firm that focused on the infinite possibilities of a microorganism called ‘euglena’. Since microalgae euglena grows by absorbing carbon dioxide through photosynthesis and it has a high per area production rate of oil that is a biofuel source, it could contribute to reducing environmental load. In 2005, Euglena Company, Ltd., became the first in the world to succeed in the mass cultivation of edible euglena in an outdoor environment. The firm also built the first biofuel manufacturing demo plant in Japan and a few years ago began research on developing plastic from microalgae euglena components. The company’s biofuel has already been supplied to domestic buses, ferries, and planes. The spirited venture firm is attracting attention as a force that could accelerate the implementation of a circular economy in our society.

Nakadai Co., Ltd., is an industrial waste treatment facility headquartered in Maebashi City, Gunma Prefecture. Compared to the recycling rate of around 53 percent nationwide, Nakadai’s staff has thorough knowledge in waste compositions and materials, and they carefully disassemble and separate waste material to achieve an astonishing 99 percent recycling rate. Since a few years ago, Nakadai has teamed up with BOOKOFF Co., Ltd., a general reuse business company for items including books and periodicals, packaged media, and clothing, to operate shops that propose new ways to utilize waste, and they also organize workshops for children. Their goal is to help establish a society that can recycle waste into resources.

The leaders of these three companies were joined by Yu Kato, CEO of Harch Inc., a company specializing in circular economy-related digital media, and Rie Takeshima, Project Leader of Dentsu Team SDGs, to discuss issues and exchange ideas to achieve a circular economy.

The potential of Japan, which has a low penetration rate of a circular economy

In order to achieve a circular economy, it is imperative to change the mindset and gain the cooperation of businesses as well as consumers. In a survey carried out by Dentsu and Dentsu Institute, “Sustainable Lifestyle Receptivity Survey 2021”, 21.2 percent responded that they have heard of the term ‘circular economy’, and 8.4 percent said they understand what it means. (The result in China was 26.4 percent and 64.4 percent respectively while the US marked 20.2 percent and 20.0 percent.) 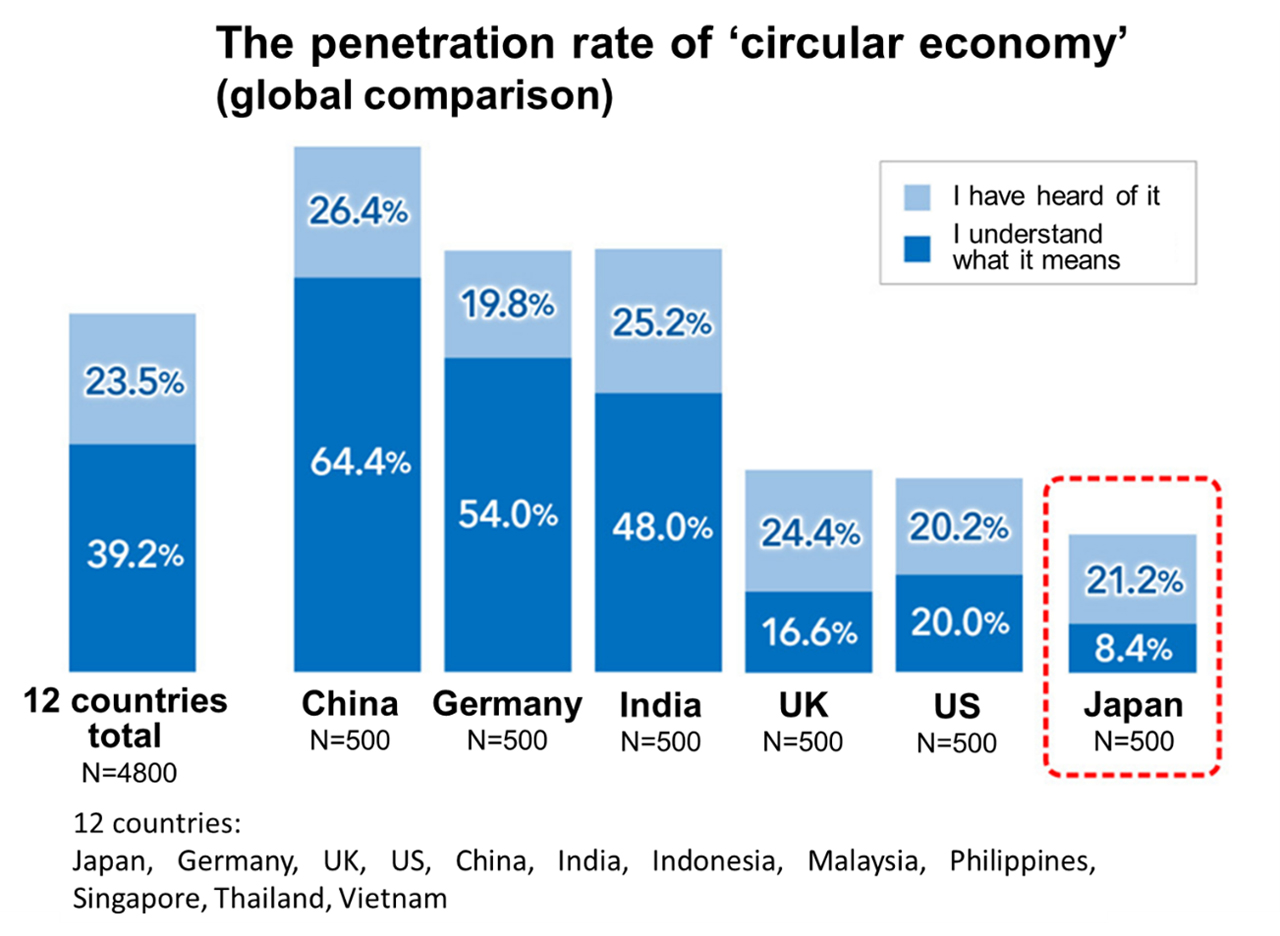 Most of the time, Europe and America take the lead in shaping and passing SDGs and environment-related rules and legislations, so Japan inevitably lags behind in action,” remarked Ms. Takeshima, and went on to say, “Although Japan has a lower recognition rate compared to other countries, surveys show that the circular economy concept resonates with the Japanese people and they wish to adopt it in their daily lives. People are open to embracing the idea.”

Meanwhile, Mr. Kato commented, “The figures were higher than what I expected from personal experience. Those who have heard of ‘circular economy’ amounted to about 30 percent, which can be converted to roughly 40 million people among the Japanese population. For example, the population in the Netherlands, one of the leading nations living a circular economy, is only about 17 million. This means there is already a market of 40 million in Japan, and this could be taken as a positive opportunity,” pointing to the big size of the market. “I think the concept of circulation is compatible with the traditional Japanese culture and thinking, so there is still a lot of potential for it to spread.”

The group then discussed the theme of what is the range of price increase acceptable to consumers to maintain a circular economy. In the “2nd Consumer Survey Regarding Carbon Neutral” conducted by Dentsu in 2021, over 60 percent of those surveyed responded that they could tolerate an increase of over 501 yen. Ms. Takeshima explained, “People in their teens and twenties, who are considered SDG natives, tend to accept a high price increase in the range of 1,000 – 3,000 yen.” Overall, there is a higher rate of tolerance among the older age groups. Ms. Takeshima stated, “I think the major reason is because they have more opportunities to come in contact with topics related to the environment and circular economy through the mass media.

Mr. Sawada has first-hand experience in attracting more customers that choose Kao’s products by calling attention to the fact that using Kao detergent can reduce energy consumption. “I feel that more consumers now have a higher ethical mindset.” Pointing out the advantages of shifting to a circular economy, Mr. Kato also added, “I get the impression that more people around me are choosing products or services that are environmentally friendly, even if it means paying a bit more. Companies may still feel that a conventional linear economy is more logical, but since the adoption of carbon pricing and other regulations is inevitable, I think the rationality of a circular economy is guaranteed for the long term.” Mr. Nakadai agreed, “Obviously there is a cost for circulation, but there is a big difference between thinking of it as ‘a cost’ or as ‘an investment’. For instance, if you focus on the highly sustainability-conscious younger generation as your main target in ten years, all costs you incur now can be interpreted as an investment for the future.”

Mr. Nagata recommended using the phrase ‘fair value’ instead of ‘cost pass-through’. He expressed his opinion: “We should all acknowledge the fact that the low price of products and services in Japan is based on some kind of exploitation, such as an environmental load or child labor.”

Mr. Sawada also commented, “Take daily consumer products such as detergents or diapers. Many products with the same quality as in Japan are sold at more than twice the price in Europe and America. So if the price is raised 5 – 10 yen to cover the costs for circulation and recycling, the overall price increase rate would be lower than in Japan. Since we see a shift in the mindset of consumers, I believe now is the time to review these gaps that exist between Japan and other countries.”

Ms. Takeshima responded, “That is probably the most important point for businesses, so we will constantly examine the changes in mindset of consumers both domestically and abroad. We also wish to work with you all to consider how we can change attitudes and behaviors.”

Five recommendations to bring about change in Japanese society

At the end of the keynote session, each speaker presented a phrase that expresses the most pressing aspect that could bring about change in Japan.

Michitaka Sawada’s recommendation: Commitment and continuation. Collaboration and alignment.
In a circular economy we must balance the environmental value and the economical value, so it is not something that can be achieved easily. We must be committed, and it is extremely important to continue the efforts without giving up. And commitment and continuation are supported by collaboration and alignment. We learned a lot from teaming up with our rival company too. If we work together and support each other, and we continue to fulfill our commitment, I think we can change society.

Akihiko Nagata’s recommendation: Select companies
You would usually associate ‘selecting companies’ with consumers choosing which product or service to purchase. I think the most important selection that people who are already in the work force can make is a career change, changing who you work for. From now on, the risk of working for a firm that doesn’t take sustainability seriously will increase. Smarter people are pursuing the right path towards circular economy and sustainability. I believe that the fundamental value of any company is its people. If more talented people come to companies working toward a circular economy, the actions of consumers can be changed.

Sumiyuki Nakadai’s recommendation: Enjoy consuming!
Our company takes on waste on a daily basis. Every time we feel let down by the way some items are disposed of, we feel that people are selecting products without really thinking about how they would end up. If you understand the extent to which the product you choose can reduce carbon dioxide, or reduce waste, or make a contribution to change society, then consuming products can be fun. It’s not only about sacrificing something in order to reduce waste. I think it’s important for people to enjoy making good choices when buying products.

Yu Kato’s recommendation: The Edo Period
If you look back in history, Japanese people in the past, including the Edo Period, actually lived a circular lifestyle. For example, the kimono is designed to use a single piece of cloth with little or no waste, and the global fashion world recognizes the kimono as the epitome of circular design. By learning from the essence of the Edo Period and combining modern technology for implementation in today’s society, we could create a circular economy that is unique to Japan.

Rie Takeshima’s recommendation: Creating an accepting society
SDGs and circular economy require a mid- to long-term commitment that takes effort, so businesses and consumers should go forward with trial and error, making some mistakes along the way. We shouldn’t criticize or try to avoid failure; we should accept each other’s failures with kindness and respect. Through mutual understanding and by sharing the same purpose and goal, I hope we can create a positive atmosphere that can help the whole society to move forward.

The next part of this series will feature the Day 1 keynote session themed on “The Full Story and the Global Front Line of Circular Economy”, and we will present the direction that companies should take in working towards a circular economy.

The hint to ‘collective impact’ that lead to a sustainable business: Sustainable d Actions (Japanese language only)