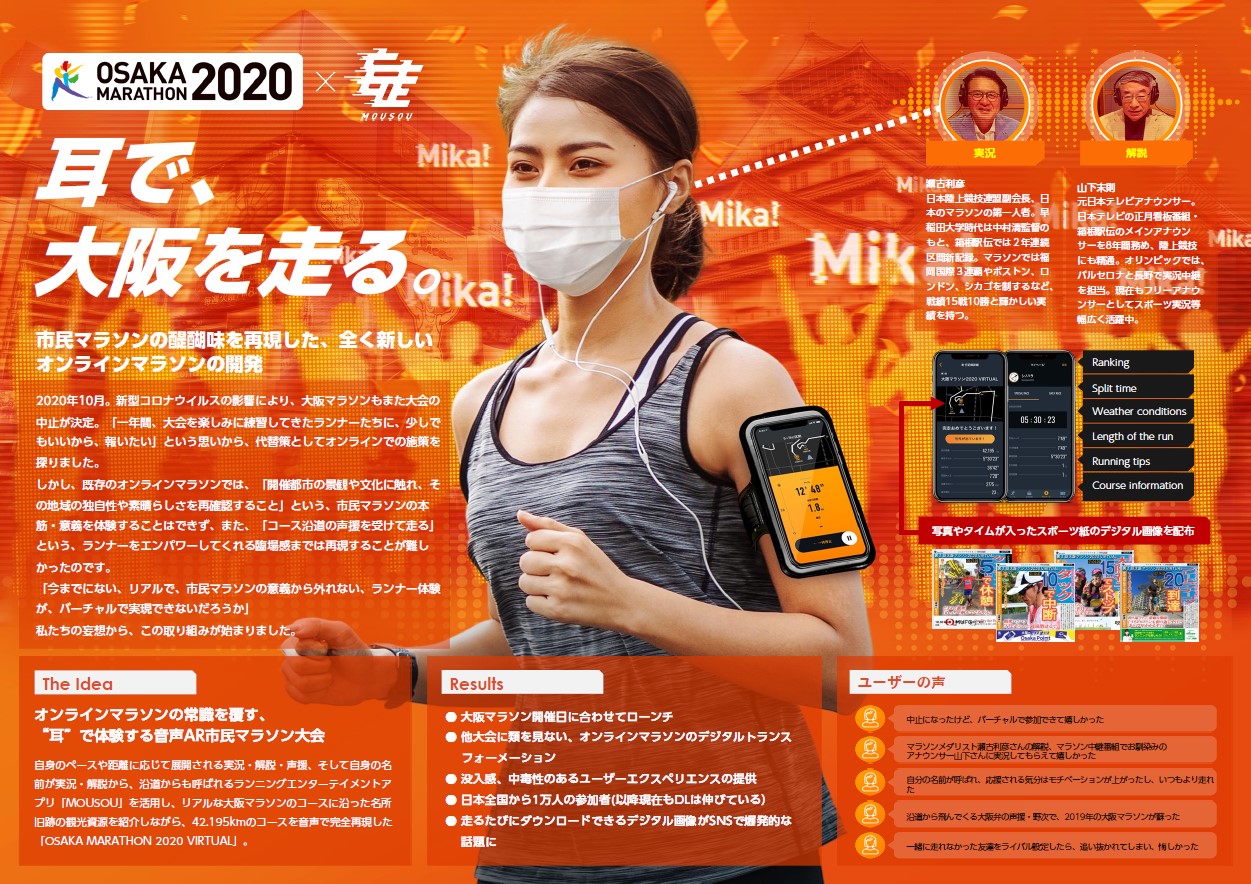 Besides the Osaka Marathon, other marathons were cancelled throughout the country. Hope faded for runners who had been looking forward to the races and attaining their goals. Nonetheless, online marathons were organized as a new alternative to the actual events. Many runners joined these events, but their participation involved running alone in silence and submitting their results.

However, the online marathons could not reproduce the excitement and appeal of a real city marathon, creating a new challenge for the country’s running community and marathon organizers.

The original purpose of the Osaka Marathon was to showcase the attractiveness of Osaka and provide opportunities for runners to experience the passion and warmth of the city’s residents. But was there any way that goal might be met during the pandemic?

A project team, including Dentsu staff, was assembled to search for an answer. Eventually the team found a solution: a virtual marathon app for runners called Mousou (meaning “wild idea” in Japanese).

An uplifting app for runners

Mousou is a smartphone app for runners distributed by Mousou Co., Ltd. When running with a pair of headphones, the user becomes a star runner in a virtual live broadcast of a marathon. The user’s running course is tracked by GPS, and the commentary and cheers from the crowd follow accordingly. This new service allows the user to feel like a top marathon runner and popular athlete, making running more enjoyable than ever.

The project team realized that through collaboration, the app had the potential to recreate the scenic course of the Osaka Marathon, with historical and cultural references, and even feature cheering from the crowd in the Osaka dialect.

The team quickly contacted Mousou to discuss a tie-up, and began developing and producing original content specifically for the Osaka Marathon. The goal was to develop interesting content for the app to reflect the distinctive character of Osaka. The team went to work on creating a user experience that would capture the essence of the Osaka Marathon in a highly enjoyable way.

Various features were incorporated into the app to make users feel they really were taking part in the marathon. After a user’s name has been registered at the start of the race, the user will hear their name mentioned in the live TV report, and even called out by the crowd lining the marathon course. This brings emotional excitement that one cannot experience when running alone. 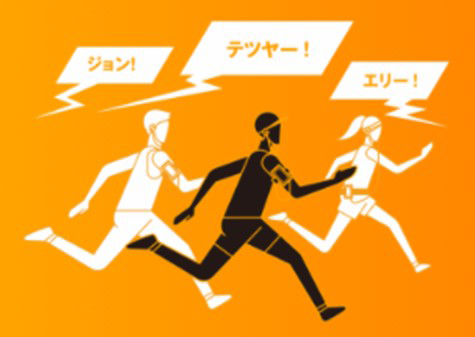 Making the user experience even more realistic, the live broadcast features the voices of Suenori Yamashita, the announcer for the popular Hakone Ekiden college relay-marathon held every New Year’s day, and Toshihiko Seko, a well-known marathon commentator and former runner. It also includes Kenji Moriwaki, who leads the cheers among the one million or more spectators that gather for the Osaka Marathon each year.

Recreating the city with landmarks along the route

In the commentary, users also hear details of landmarks along the marathon course corresponding to how far the runner has gone.

Just like the real Osaka Marathon, the noise from the crowd along the roadside never stops. Even if tired, the app user is encouraged to keep running to the finish. The naturally flowing banter includes cheers, as well as tough, but supportive, spontaneous quips in the Osaka dialect.

Through these features, the project team created highly immersive content for users. To successfully put on a major event, however, creating content is not enough. Since the actual marathon was cancelled, the Osaka Marathon Organizing Committee will receive no revenue from fees paid by virtual participating runners. Thus, gaining support from corporate sponsors was essential for a full-blown event to be held.

To this end, the event had to offer sponsors attractive benefits. So the project team considered how to integrate promotional methods that would be of interest to corporate sponsors. The team already had designed content that would reflect the character of Osaka, even in the absence of an actual marathon. But, since such app features and user experience had never been created before, the team now had to come up with distinctive benefits for sponsors. After incorporating various ideas, the team devised the following three advertising techniques.

1. Similar to infomercials, simple audio advertisements mentioning product brand names would be smoothly integrated in the live reporting and commentary that users hear while running.

2. Advertisements would be placed in a digital version of a newspaper extra, about popular runners. In Japan, such editions are regularly handed out during marathons.

Designed like a newspaper’s sports section, the digital version would feature a photo of the user, who could download it after every five kilometers he or she had run in the marathon. Easily shared on social media, this newspaper extra could be an effective way of disseminating ads. 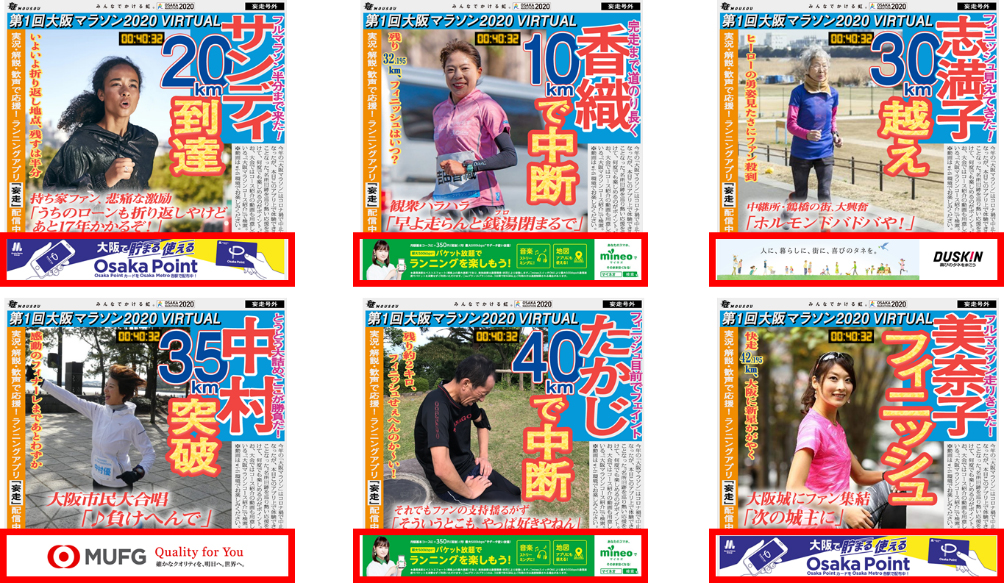 3. Sponsors could offer digital coupons—similar to those handed out in Japan by supporters along a marathon course—and collaborate with convenience stores and vending machine operators.

Recognizing the benefits of these advertising techniques, most of the official sponsors of the originally planned Osaka Marathon 2020 agreed to sponsor the new event. Among them, Osaka Metro Co., Ltd., was a particularly important sponsor, given that its subway lines and stations follow the marathon’s course more closely than those of any other line in the city.

As a virtual event, it was held over a period of 16 days, without any problems but with plenty of excitement among more than 10,000 participants. And the Mousou app continued to be downloaded even after the event.

The virtual marathon was successful in conveying the attractiveness, history, and culture of Osaka, which was an important objective of the Osaka Marathon Organizing Committee. Fortunately, the event was held with the strong backing of Osaka Metro, which operates subway lines directly under much of the marathon’s course.

Osaka Metro commended the app contents for effectively conveying the company’s history while promoting its latest services, as well as products offered by Group companies. The other official corporate sponsors also stood firmly behind the new challenge of holding the Osaka Marathon and its goal of making running fun.

As a result, the event attracted favorable coverage by numerous media organizations and, more importantly, many participants expressed their enjoyment and satisfaction. A few examples of their reactions are given below:

“Although the marathon was cancelled, I was happy to participate in the virtual version.”
“It was fun to listen to the relay-marathon announcer Suenori Yamashita together with comments from marathon medalist Toshihiko Seko.”
“I felt a real boost when I heard my name called out. That motivated me more and I ran harder than usual.”
“Hearing the cheers and shouts in the local dialect from the roadside brought back memories of my race in the 2019 marathon.”
“I ran together with a friend, but unfortunately I couldn't keep up.”
“The digital newspaper extra was easy to share on social media.”

This project was successful because the highly original and distinctive Mousou app integrated content designed to recreate the course of the Osaka Marathon. As an event to which many runners aspire, the marathon offers users a more motivating and enjoyable running experience because the app reproduces an actual running course, broadcast commentary, crowd noise, and a lively atmosphere.

The app’s ability to convey the city’s charm and history in an interesting way is a feature provided by no other app for runners. It can offer a new experience to people who have been unmotivated to run alone during the pandemic, and can be expected to become more popular as a source of enjoyment for beginning to veteran marathon runners.

Looking ahead, Dentsu plans to work with Mousou to upgrade the app, making it compatible with other runners’ apps and even different types of apps, as well as by enabling multiple languages to be used.